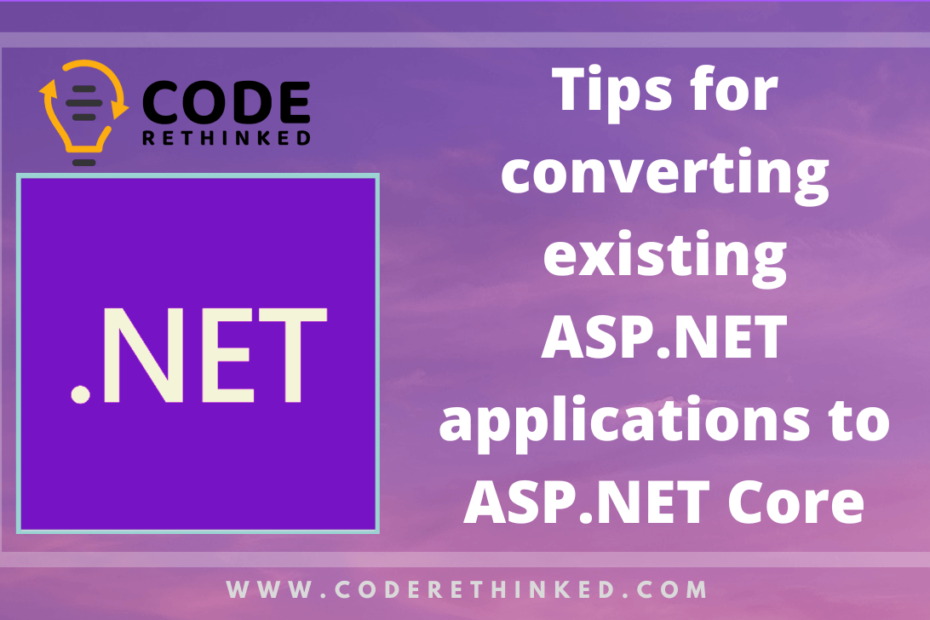 The evolution of microservices greatly impacted how we think, write and manage applications in the cloud environment.

The existing monoliths are being migrated slowly to implement microservices and their patterns.

Scalability is one of the major aspects that developers/architects looking for migrating from ASP.NET Framework to ASP.NET Core.

I was reading the ASP.NET Core in Action, 3rd Edition, and found this chapter interesting on migrating existing asp.net applications to asp.net core. So, this blog post is about migrating.

More on this topic in ASP.NET Core In Action, Third Edition book by Andrew Lock

Drawbacks of a monolith application

But, there are benefits of asp.net core that come along with migrating existing asp.net applications such as

However, converting the existing asp.net applications may involve additional cost and technical expertise to do that transition.

There are difficulties converting the following applications to asp.net core

If the application is asp.net web forms, trying to convert it is not advisable as web forms are tied to System.Web.dll and IIS.

The conversion involves a complete rewrite of the app in ASP.NET Core.

It doesn’t mean your hopes of converting are dead at this point. There is a community-driven repository that guides on how to reuse much of the markup as in blazor.

You can slowly transition the APIs into asp.net core web API application by reducing the reliance on the web forms concepts like ViewData.

Converting from the WCF application to ASP.NET Core

Windows Communication Foundation (WCF) is partially supported in ASP.NET Core. Again, it’s possible to build using the libraries for both the WCF client side (part of the .NET foundation) and the server-side (supported by the .Net foundation).

However, the above-mentioned libraries don’t support all of the APIs available in the .NET framework WCF. If you need all of them for sure, don’t migrate to ASP.NET Core for now.

If an MVC application is complex and uses the extensive features of MVC like message handlers, then porting to ASP.NET Core will be more difficult.

Andrew Lock teaches you how you can use your C# and .NET skills to build amazing cross-platform web applications.

When to port an application to ASP.NET Core

If the existing application will need significant future development, then migrating to ASP.NET Core is a good choice.

If your application is rarely used and may not involve additional development efforts, then it’s better not to migrate to an ASP.NET Core application.

Microsoft will support .NET Framework for years to come (you may have to update the framework) though we have a new release of ASP.NET Core 7.

It’s best to work in chunks rather than converting the entire application at once and Microsoft also provides YARP (a reverse proxy for .NET) and also ASP.NET Migration Tooling in Visual Studio to help implement the strangler fig pattern.

ASP.NET Core applications offer modularity and performance at the same time. And they are best suited for microservices in the .NET ecosystem.

If your existing business is built on ASP.NET Framework and is working well and getting fruits for you then you don’t need to migrate to ASP.NET core.

Converting existing applications to asp.net core is possible but it involves planning, time, effort, and resources.

If you are creating a new product and the product really doesn’t need to be scalable for a huge number of users, you may not need to do it in ASP.NET Core. But, I’d recommend creating applications in ASP.NET Core now because .NET Framework may eventually retire sometime in the future and you may have to look up for ASP.NET Core again.

This article is sourced from a chapter in ASP.NET Core In Action, 3rd Edition written by Andrew Lock.

Andrew lock also gives a great insight into how the ASP.NET Core works and how it processes a request and many great things we can do with ASP.NET Core. It’s worth a read.

The first three users to utilize the below coupons will get a free eBook version of ASP.NET Core In Action, 3rd Edition by Andrew Lock. Here are the coupon codes

Also, get 35% off on all books with this coupon code: blrethinked22

How to create a custom feature filter in ASP.NET Core

Getting started with ASP.NET Core 2.1
Tags:aspnetcoremonolithmvcwcf